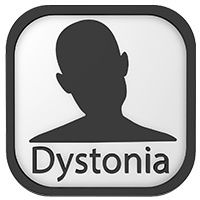 Dystonia is a neurological movement disorder syndrome in which sustained or repetitive muscle contractions result in twisting and repetitive movements or abnormal fixed postures. The movements may resemble a tremor. Dystonia is often intensified or exacerbated by physical activity, and symptoms may progress into adjacent muscles.

Symptoms vary according to the kind of dystonia involved. In most cases, dystonia tends to lead to abnormal posturing, in particular on movement. Many sufferers have continuous pain, cramping, and relentless muscle spasms due to involuntary muscle movements. Other motor symptoms are possible including lip smacking.
Early symptoms may include loss of precision muscle coordination (sometimes first manifested in declining penmanship, frequent small injuries to the hands, and dropped items), cramping pain with sustained use, and trembling. Significant muscle pain and cramping may result from very minor exertions like holding a book and turning pages. It may become difficult to find a comfortable position for arms and legs with even the minor exertions associated with holding arms crossed causing significant pain similar to restless leg syndrome. Affected persons may notice trembling in the diaphragm while breathing, or the need to place hands in pockets, under legs while sitting or under pillows while sleeping to keep them still and to reduce pain. Trembling in the jaw may be felt and heard while lying down, and the constant movement to avoid pain may result in the grinding and wearing down of teeth, or symptoms similar to temporomandibular joint disorder. The voice may crack frequently or become harsh, triggering frequent throat clearing. Swallowing can become difficult and accompanied by painful cramping.

Primary dystonia is suspected when the dystonia is the only sign and there is no identifiable cause or structural abnormality in the central nervous system. It is suspected to be caused by a pathology of the central nervous system, likely originating in those parts of the brain concerned with motor function, such as the basal ganglia, and the GABA (gamma-aminobutyric acid) producing Purkinje neurons. The precise cause of primary dystonia is unknown. In many cases it may involve some genetic predisposition towards the disorder combined with environmental conditions.
Secondary dystonia refers to dystonia brought on by some identified cause, such as head injury, drug side effect (e.g. tardive dystonia), or neurological disease (e.g. Wilson’s disease).
Meningitis and encephalitis caused by viral, bacterial, and fungal infections of the brain have been associated with dystonia. The main mechanism is inflammation of the blood vessels, causing restriction of blood flow to the basal ganglia. Other mechanisms include direct nerve injury by the organism or a toxin, or autoimmune mechanisms.
Environmental and task-related factors are suspected to trigger the development of focal dystonias because they appear disproportionately in individuals who perform high precision hand movements such as musicians, engineers, architects, and artists. Chlorpromazine can also cause dystonia, which can be often misjudged as a seizure. Neuroleptic drugs often cause dystonia, including oculogyric crisis.

Occurrence process of dystonia in FCST

9 of the 12 cranial nerves are found near the temporal bones from which the mandible is suspended. These cranial nerves are related to 136 muscle groups by which body can hold certain postures. TMJ imbalance triggers negative stimulation onto the surrounding nerves; in turn, the related muscles are tensed and contracted leading distortion of cervical vertebrae as well as spinal structures. The subluxation of C1 and C2 gives pressure on the brain stem with blockage of oxygen and nutritional supply to brain and disturbance of CSF circulation. As a result, it will bring cranial and neurological malfunction like as dystonia.